A day of sunshine and showers whilst out photographing the mountain hares. After 2 hours of almost packing up and heading home, a beautiful female mountain hare quite happily posed through rain and shine for over 3 hours.  High 4, yawning, scratching,  stretching and just staring for me. Precious moments. All this with a backdrop of stunning cloudscapes and a couple of Golden Plover calling away in the distance. BBrilliant. 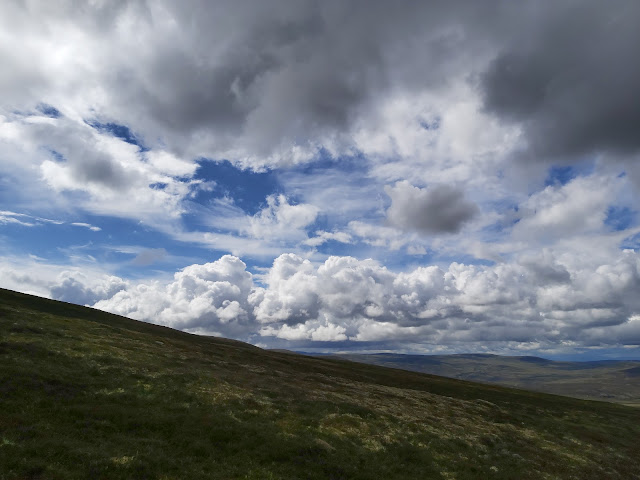 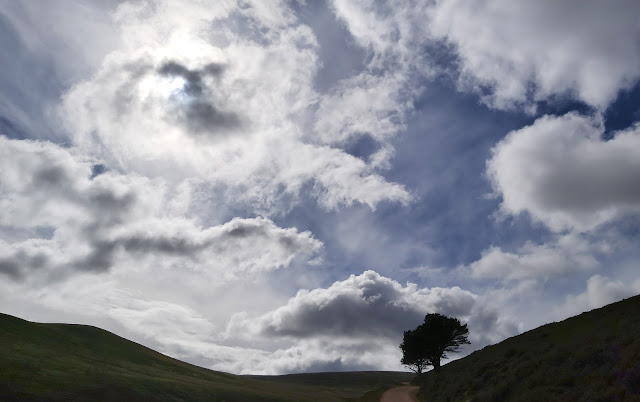 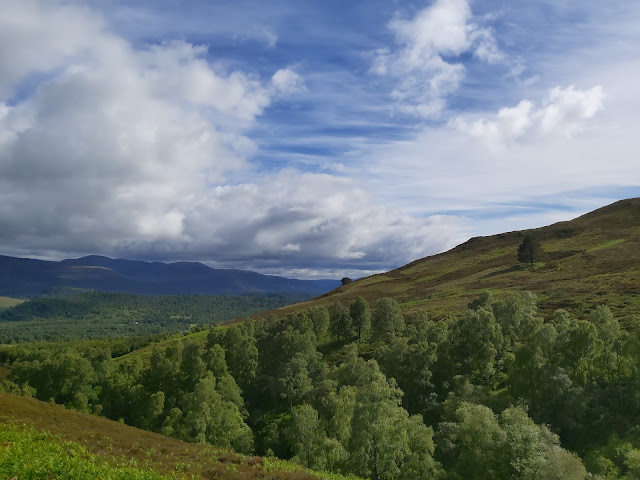 Hares later but see if you can see her in one of the cheap mobile phone snaps here.

Posted by Gary Hodgson at 20:58 No comments:

Last week we had a short 7 day jolliday on the Mediterranean island of Corsica. Like most folk this was our first holiday out of the UK for 3 years. I almost forgot what you do at an airport. With it being post brexit then maybe things had changed dramatically. But no fear, only difference is we now have a return to the old stamp in the passports. I knew there was something good about leaving the EU. 😉.
With only a few days to get a taster of Corsica we ruled out the entire GR20 trek. This 2 week long trail has a reputation for the 'toughest' trek in Europe. We eased into our holiday down at Ajaccio's beach.Ajaccio is the 'capital' of the island. One morning was enough of the hustle and bustle for us. We set off into rural Corsica late afternoon, using the wonderful railway that runs to the northern part of the island. The railway journey crosses the main mountain chain in the centre of the island.

The train whisks you up into the mountains. From sea level we alighted at the small hamlet of Vissavona, taking just one hour. A very different world here.
Vissavona is the only real habitation with 'comfort' along the entire GR20 route. If you intend doing the whole trek then it's camping or refuges every night, except here. Vissavona also marks the halfway point if doing the whole trek. We roughed it in a charming wee hotel here.

We decided on a day up to Monte d'Oro which is mountain summit reaching over 2,300m, a side trip off the main GR20 trail. The skies were blue, the sun was very hot even at 8am.
It was very hot work on the trail. I went through 4 litres of water. The trail passes beside lovely pools of water and small waterfalls. The lower reachesof the hill are covered in Beach and Maritime Pine trees amongst other fine woodland.

We had a good 10 hour day up the hill. It was quite busy we thought. June is supposed to be one of the quieter months. Like most trekking routes in the world, the trails are becoming busier and evermore popular. I don't think I would like to walk it in July or August. Crowded and even hotter I would guess. It was around 30 C in Vissavona and not much cooler on the hill.
The following day we had another day of walking on a quiet trail. Same temperatures. Lots of wonderful butterflies. I was disappointed that there is very little wildlife in these hills.
We took the afternoon train from Vissavona and continued on our exploration to the north of Corsica. A beautiful 4 hour journey to the town of Calvi.

Calvi is a lively town on the coast. If you want nightlife, it's here! The harbour front is lined with many restaurants and plenty of ice cream shops. There's a few million Euros worth of yachts and boats moored up here. We slumbed it for a day on a RIB to take us out along the coast. It was lovely and cool temperatures. 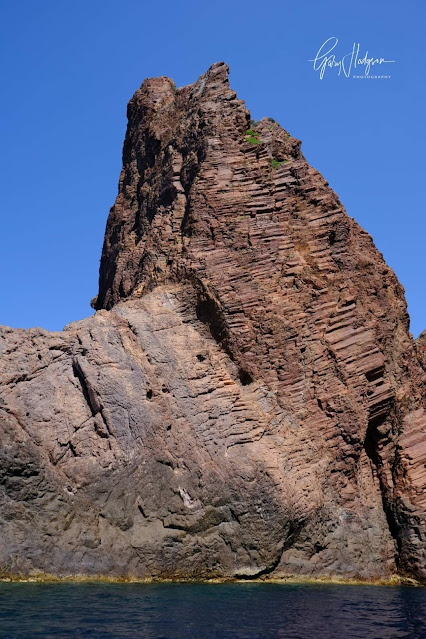 The impressive rocky cliffs at Scandola were a brilliant half day out.
Corsica will need a return visit sometime. The GR20 looks a grand trek.

Posted by Gary Hodgson at 22:37 No comments:

A selection of my photography from the last coupe of days.

On Thursday it was a glorious day. I headed onto the Cairngorm plateau in the hope of seeing and capturing some of our wonderful and precious montane animals and birds. I scrambled up the Fiacaill Coire Cas ridge. There were several male snow bunting calling away on the ridge. fabulous. Unfortunately my camera was in the bag! On the plateau I did spot a juvenile snow bunting. Not has colourful but equally special.

I was on the search for the beautiful Dotterel. Unfortunately none see all day. Also on my radar was ptarmigan. It took me over 4 hours of searching before I finally got to see an hen ptarmigan with her 6 chicks. Brilliant!

I just sat at a safe distance as I tried to spot the chicks which were all separated. Eventually one popped up and just stood posing for a while. All images are cropped. 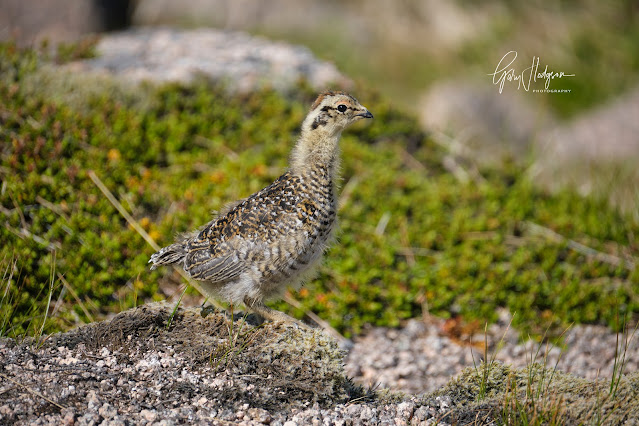 Some images from another lovely day on Friday. The Monadhliath's lower regions looking splendid with an array of beautiful flora and fauna.

Another beautiful sound in the hills is that of the Golden Plover. A constant call across the hillside is no finer sound on a late Spring/early summer day. 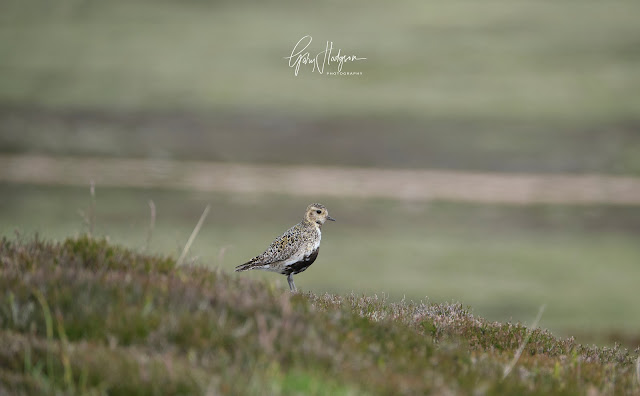 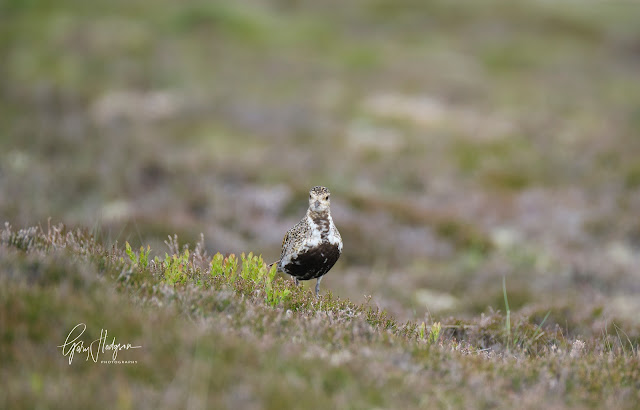 A few more of the abundant colours on the hill.

Posted by Gary Hodgson at 16:50 No comments:

Last week I was down in Corsica for a week long trip. More on that in my next blog.

Back home in the Cairngorms it was a beautiful day in the Northern Cairngorms. Wall to wall sun and a perfect breeze for lovely temperatures up high.

Had a great scramble up the Fiacaill Coire Sneachda ridge,  starting off in the steep boulderfields of Coire an t-sneachda to gain the ridge. There was a constant call and singing of several male Snow Bunting on the ridge. At one point I was eye level and just 1 metre away from a Bunting, on the steep section of scrambling.

Later on in the day was the highlight. I found a female Ptarmigan with her 6 chicks. Absolutely beautiful. I spent over an hour at a safe distance with this wonderful group. Very heart warming considering their very low numbers over the last few years.

Posted by Gary Hodgson at 22:37 No comments: