We've been enjoying some fine early winter conditions up here in The Highlands. Last week saw a series of low pressure systems mixed with some cold air being dragged down from the north. Snow has been falling above about 800m on may of the high tops. The West and North West Highlands looked to be getting a bigger share of the white stuff than The Cairngorms. The last of these weather systems came through on Sunday into Monday before being replaced by a big high pressure system drifting across much of Scotland. The best of the sunshine seemed to be forecasted in the North West. This was the place to be!
On Monday I headed over to Torridon, the finest mountain region on the planet. I was to meet up with Robin on the Tuesday evening. Before that I wanted to capture sunrise over Liathachs Northern side. Of course being north facing it is difficult to get a good photograph of it's fantastic northern corries and buttresses. The place I had in mind was high up on Beinn Dearg which lies north of Liathach. Beinn Dearg almost reaches that magical 3000ft (914.7m) high point, but only attains 914. There was some itchy feet from Munro baggers a few years ago when the mountain was re-measured but it turned out it was actually slightly lower than the official Munro height. All the better for it. It is a much less visited mountain in the Torridon area.
I set off mid afternoon along the Coire Dubh Mor path. This fine trail cuts between the mighty peaks of Liathach and Beinn Eighe. There are some delightful lochans after an hour or so and it was from here that I left the good path and headed onto Beinn Dearg. Pathless terrain from here onwards. A real feeling of wildness and remotness, key qualities I savour. I reached a broad bealach on Beinn Dearg at 658m just before dusk. It's amazing how quickly the light fades this time of year once we get to mid afternoon. Earlier sun gave way to cloud cover, then Liathach revealed it's grand northern side just before darkness fell. I had a fine spot to camp with views out to The Flowerdale Forest area as well as Liathach.

The clouds dissipated during the night and it was a deep frost. I had  a coating of ice on the tent the next morning. I was up sharpish to catch that wonderful sight of the sun rising. Timing was crucial before the sun gave too much glare into the camera. There's no better time of day than being up on a mountain at sunrise and knowing there is no one around. In fact I saw no one for the 26 hours I was out in the hills. The only life I saw and heard was a solitary croaking ptarmigan near my tent, a pair of ravens,  a few snow bunting and red deer.

I had a very leisurely morning wandering around the long ridge of Beinn Dearg, soaking up the various viewpoints and sunshine. To get to the main summit of Beinn Dearg from this eastern end of the ridge involves tackling a stunning rock tower which guards the final summit ridge. A steep  scramble over icy and snowy rocks didn't look enticing and the exposed grassy ledge around the side looked even less appealing. I was content to enjoy the views from 800m.   By mid afternoon the sun is sinking west. Less glare in the lens and so another opportunity to capture Liathachs north side again.

Afternoon cuppa outside my tent in the sun was bliss. Packed up and headed out with those mesmerising views of Beinn Eighe and Liathach. Passed by some deer who were completely un-interested in me. Time stands still in this area. What a magical place.
I was soon back on the path that circles around the north of Liathach, the Coire Dubh Path. An easy walk out with some lasting views of Liathach and the numerous wee lochans with afternoon reflections.

TUESDAY 30 OCTOBER - BEINN EIGHE
I camped down in Glen Torridon on Tuesday evening meeting up with Robin who has almost completed all the Munros. He has been out on Liathach and Beinn Alligin with me recently in glorious weather. His last Munros in the Torridon area are on Beinn Eighe. Another below freezing night. The tent having even more frost over it while Robin was 'wild camping' in his luxurious campervan. I did sneak breakfast and hot drinks in Robins van the next morning though. We set off early doors, catching another glorious sunrise.
We decided to traverse the Two Munros on Beinn Eighe starting at the Eastern end, ascending Coire an Laoigh and up onto the ridgeline to 'bag' Spidean Coire nan Clach first. Despite a very frosty morning we were soon down to baselayers in the warm sunshine. What a beautiful clear morning again. The snowline was around 800m and with some melt/freeze the day before we were soon donning crampons and ice axe for the steepening slopes out of the coire. It was like an Alpine start. Smiles all round for conditions like this at the end of October!
Beinn Eighe is straightforward 'hillwalking' unlike its big brother Liathach which involves some scrambling on its pinnacled ridge. Of course in winter things are always different and much more exciting. Beinn Eighe's Spidean Coire nan Clach Munro has a little spicy last few metres to its top. Great fun with a few wee moves to attain it. We stood on the summit with 360 degrees Alpine views. Clear skies, snowy ridges and a beaming early morning sun. What a privilege.


From Spidean over to the 2nd Munro of Ruadh-Stac Mor involes easy ridge walking with stupendous views all the way. Liathach is directly in front of you as you make your way along the easy ridge. My eyes were drawn to Liathach for an hour or more. A photographers paradise. The traverse between the two Munro summits takes a fair while which is good reason to have an early start this time of year and of course, snow will make progress slower too. Robin was on Ruadh-Stac Mor by mid day and we had bags of time to make our way back down. The fun and views aren't over yet! There is a steep descent into the amazing Coire Mhic Fhearchair.

The 'chimney' down into the coire was fun with just a few bits of snow and ice on the ledges. It's far easier to stick to these easy steps rather than straight into the middle of the gully where there is loose scree. The impressive rock buttresses, crags, boulders, wee waterfalls and lochan make Coire Mhic Fherchir one of the finest corries you could ever feast your eyes on. Just going for a walk into the coire is a magical day in itself.
The only folk we saw all day were two lads walking up through the coire early afternoon. After our final gaze at the Tripple Buttress we tore ourselves away and headed down the easy path back into Coire Dubh Mor. What a day! Torridon. Love it. Will be back soon!

Posted by Gary Hodgson at 15:34 No comments: Links to this post


As soon as you pick up Scottish Island Bagging, you immediately feel the quality of the publication. The stunning photographs are a lovely trip down memory lane for anyone who has already travelled to any of the 150+ islands on display in this book, and a wonderful source of inspiration to those hoping to explore them in the future. Even though I have completed two rounds of the Munros, I’m still wary of the term ‘bagger’. However, it was clear from the off that authors Helen and Paul Webster share a similar philosophy to mine i.e. that the Scottish islands and landscape in general are to be explored at leisure, to be immersed in, and the longer the immersion the better, and not as “bagging” can sometimes suggest, to be ticked off a list as quickly as possible. This is a lavish guide book covering all 99 islands that can be reached by regular or chartered ferries, bridges or causeways. Also included are details of a further 55 islands that don't have any form of transport to them. You may need to be the adventurous type to take these on! Each chapter gives a general geographical outline of the island or group of islands along with maps and directions. It is full of useful and interesting information relating to human history, wildlife and trails. There are many general sightseeing tips and local food suggestions for those on a culinary visit. With over 240 pages of information and photographs, the guide has been extensively researched, and judging by the plethora of photos of sun-kissed beaches, I’m guessing some locations were visited a number of times! If you plan on ‘bagging’ any of these glorious islands, then this guide is the perfect companion.

Published by Vertibrate Publishing and available from all good book stores and online or visit the Walk Highlands website. 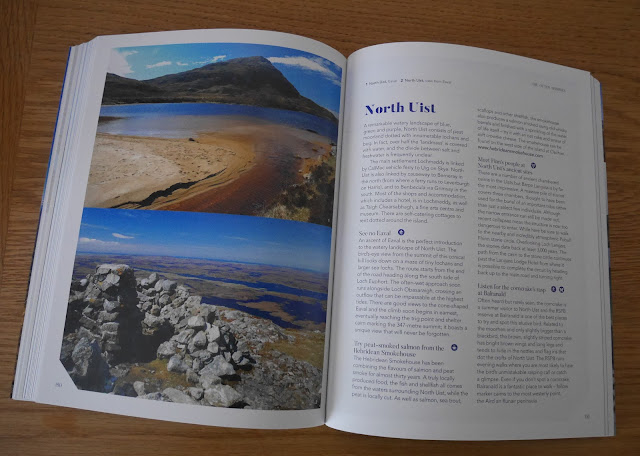 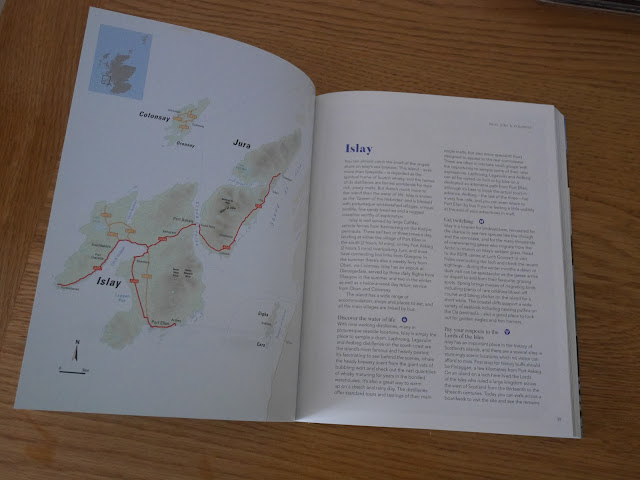 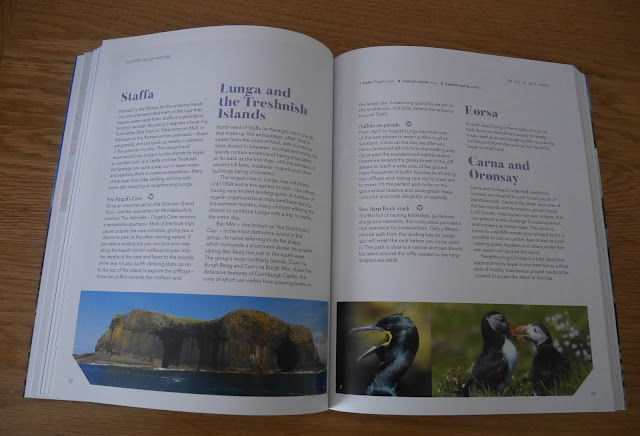 Posted by Gary Hodgson at 09:50 No comments: Links to this post

THE RETURN OF THE PTARMIGAN


A cold night and the summits well below freezing today in The Cairngorms. Some early sunshine but by late morning we got a few snow showers on a brisk wind and visibility dropping. Lower down in the coire it was quite pleasant with only slight winds so good conditions for wildlife photography. Great to hear plenty of ptarmigan croaking away throughout the day. It's been disappointing recently with only a very few ptarmigan spotted and hardly any in their 'usual' spots. They're just starting into their winter feathers, looking brilliant. A wonderful time of year. Today that had changed. I spotted at least 12 ptarmigan. I guess with the recent gales they've come in from high ground into sheltered corries. The Mountain Hare is also getting whiter by the day, shedding its Autumn pelage and getting prepared for winter.
The west Highlands seemed to get the best of any snow today. Tomorrow it looks that the Cairngorms will be getting a fair dump so will be looking a lot whiter and well into next week.
Winter is on its way.

Posted by Gary Hodgson at 17:25 No comments: Links to this post

It was a cold night and another light dusting of snow, even down to lower elevations. This morning was beautifully cold and clear. Another day of strong winds on the high Cairngorms with minus temperatures on the summits..
We have plenty of wonderful low level walks in the Strathspey area. One of the easiest and most beautiful of these is a walk into the Craigellachie Nature Reserve. You can walk direct from the hustle and bustle of Aviemore and be amongst some beautiful woodland within just a few minutes. It's like a miniature mountain scape here. Woodland and some fab wee lochans and above 500m you come out of the trees and great views down Strathspey and south to the Northern Cairngorms. Autumn at Craigellachie is the finest season of the year for me. Just glorious. The trees are just about at their prime now. In another week most of the leaves will have dropped. I always think that this marks the start of winter for sure. The next few days it is forecast to be cold and snow falling on the high mountains. Winter is on its way.
Posted by Gary Hodgson at 15:34 No comments: Links to this post