I had a liesurely morning before heading out on the hills to photograph my favourite wildlife subject, The Mountain Hare. It was after 2pm by the time I got up the track on the Monadhliath hills. Bags of daylight hours of course this time of year so who cares. I saw no one on the hill. Wildlife photography can be a frustrating sometimes. Usually weather related. Weather of course is a big factor. It seemed that earlier on in the day was actually sunnier, sometimes forecasts aren't too accurate. There was also a keen, cold 25-30mph wind which threatened to spoil any good images with camera shake.
Despite the noise of the wind I managed to pick out that unmistakable, glorious call of the Golden Plover. Animals are smart of course and these beautiful wee plovers  were on a wind sheltered slope. Last time I was up here they were all over the area. This afternoon the numbers were lower. I got down onto some boggy ground to try and get some closer images. One hour later and the sun peeped behind the clouds. I moved on from my damp, boggy spot and found another pair calling in the wind higher up. This time I got good cover behind some boulders and my patience paid off. There was a lovely wee character calling his heart out oblivious to the fact I was close by.
That was the closest I got and happier with the shot. It was getting into late afternoon by now and having not too much joy getting my Mountain Hare photographs. You need to be patient and with the wind it can be a real struggle. The light was bad too, quite dark at times.  I wandered around till after 6.30pm before the conditions improved with some beautiful light over Strathspey and the Cairngorms.

Just as I was about to head down the hill and home for dinner, I spotted a lovely individual Hare who was lazing in the early evening light. Wildlife photography, especially with the Mountain Hare, requires gaining their confidence, moving slow and being patient. Amongst many other field craft skills. I was eventually 'allowed' to sit down on the rocks with this guy as he lazed, ate and had a quick look at me and realised I was no threat. These are the special moments. You can now sit and take your time with your composition of images.

I had another marvellous hour watching my Hare as he grazed and scratched, stretched and yawned. I could have quite easily spent another hour with him but it was getting on a bit and I was getting hungry too! I left him in peace and yet more magic moments from these adorable creatures. Thank you sir.

I run wildlife photography workshops throughout the year and I am now back guiding in the hills and running wildlife tours. 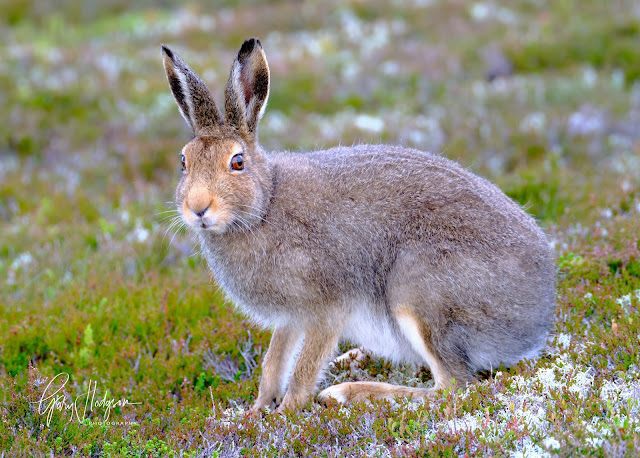 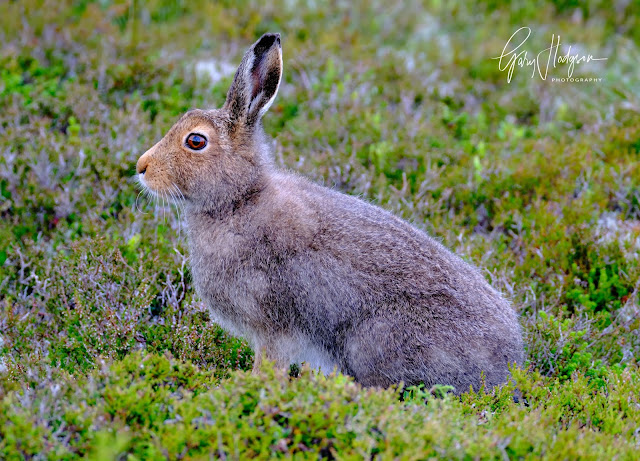 Time to head down and beautiful evening light on my bike ride home.